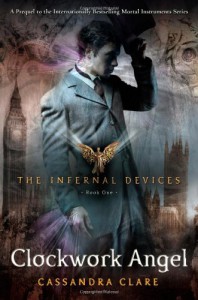 I think that as far as writing goes, this book is defiantly better than some of the previous ones and I really enjoy the plot. I did not, however, like that it seemed as though there were a lot of reused characters and scenes. I often felt like I was rereading the Mortal Instruments books. I guess that the point may be to draw parallels between them but I think that if that was the case it was poorly done. Characters who resemble their ancestors is one thing, but it is another think when they are just a patchwork of the original characters. Tessa seems to be a Simon/Clary Will a Jace. Jessamine reminds me of an angry Isabelle. The list goes on and on. The only character that I felt was truly a new character was Jem. I think that the reason I noticed this was the small scenes that were almost identical in events and even wording. (Clary/Tessa yelling at Alec/Charlotte, feeling bad for yelling, but continuing anyways is the example that really stuck out to me although it happened all through out the book)
I was really impressed with the way that the author described Victorian times. I am no expert but she seemed to incorporate little details that I wouldn't have even thought of.
Altogether I thought that it was pretty good, I hope that there is more Magnus Bane and Camille in the next book.
Tweet