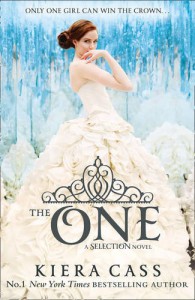 This book was not as good as the first one, but much better than the second. I really liked that the back and forth between Aspen and Maxon came to an end pretty early on. As I've said in my review of The Elite, I was not a fan of the love triangle. I still found the love story plot a bit tired. Maxon was selfish and obnoxious dating 3 people at once, although I do know that is the basis for this series. The thing that got me though was the childish games that America and Maxon played with each other. Who cares who says I love you first? Page after page of back and forth monologues about how she loves him but can't or won't say it unless he says it first, and then the arguments over who should say it! For Heaven's sake just someone say it and be done with it!

As far as the political aspect, I thought it was amazing! I liked the way the northern rebels' story line played out and I absolutely loved the scenes with the Italians. This book had a feel that danger was right around the corner, but unlike the previous book, it felt important, and worth the risk.

I also really enjoyed seeing the family dynamic in the Singer household and was genuinely sad when the father died. I did not, however like the 180 Celeste's character pulled. I think she started out too extreme and had to come too far too fast to make it believable. I did like her after said unbelievable character change.

I think that the ending was rushed and a little bit of a cop out, but I saw it coming. Too much setup had been laid out for the Aspen reveal not to touch on it, and the king had to die to tie this up nicely. I didn't see the queen's death coming though, and was upset about that. I really liked her, she seemed like quite a lady.

If someone liked the first two books, I think that they would really enjoy this wrap up of the series.
Tweet